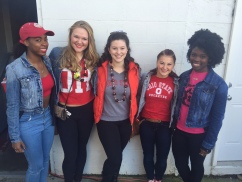 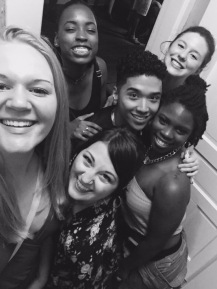 I was just sitting in my room listening to the soothing sounds of Lianne La Havas on Spotify and I felt so… happy and carefree. Ever catch yourself just sitting alone and smiling at nothing in particular? I’ve been doing it a lot lately and honestly, it feels a little crazy.

Four years ago I was one of the most pessimistic people you could be and still have friends. I thought I was on the borderline of realism but in reality, I was just a Debbie Downer in denial. Today, I am the most positive I think I’ve ever been…

and I honestly, I owe a lot of it to the university that has changed my life.

Going to the university of your dreams doesn’t stop life from happening to you. Being somewhere you love doesn’t stop life’s lulls and low-points. 2015 started and something pulled me down into the depths. To this day I can’t tell you exactly what I was going through or why, but whatever it was truly forced me to spend some time alone with myself and learn to fall in love with who I am.

2015 I gained (a little) weight and became completely neurotic about it. I had several friends who lost loved ones. I gave someone the power to break my spirit, time and time again. I watched someone I love get hurt on national television. I got in my own way a whole lot.

It’s the little things. Ohio State has given me the little things that turned into big things. In 2015, I wrote a project proposal for $2,000 to fund a project I had no idea how to execute. In all honesty, it failed, but I learned from that failure and it has informed so many great things that I’m experiencing now. In 2015, I was chosen for a repertory company to tour Salvador, Brazil during spring break. We started preparing for that tour in the fall and this experience has already changed my life. In 2015, I applied for a fashion journalism internship at CollegeFashionista.com on a whim. My final article of the semester landed me on the front page of the site, and now I am also an editorial intern.

As I brought in the new year I felt invincible, as if I could take over the world and I should do so. I owe a lot of that to OSU. From the courses I took this past semester, to the faculty I’ve interacted with, to the friends I’ve made—everything leads back to the school that has made everything worthwhile for me.

I had to fall in love with myself on my own, but there is a plethora of people at this university have pushed me and supported me so much and I cannot deny that that has helped me grow exponentially. 2016 is a new year and it’ll be totally different, just as every year before it has been.

I look forward to a year of fearless creating, performing and existing. I am so blessed every single day.

View all posts by gabriellawiltz